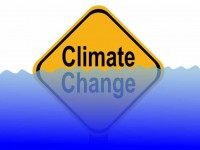 Consider, too, a 2015 Department of Defense report, which framed climate change as a geopolitical “threat multiplier” that will “threaten domestic stability in a number of countries,” and cited a study showing how a five-year drought in Syria contributed to the outbreak of the current conflict there. Nonetheless, denial is coming back in fashion among the most powerful. We have a president who dismisses climate change as a hoax, and a budget director who belittles government programs to study and adapt to our new reality as a “waste of your money.”

The above quotation is from an article on climate change found in the April 22, 2017 The New York Times Magazine devoted to climate change.  The entire issue makes for important reading

The author of this article, Jon Mooallem, makes two chilling points: First, that while often framed as what catastrophic changes may occur in a relative short time, climate change is in fact happening now.

The future we’ve been warned about is beginning to saturate the present. We tend to imagine climate change as a destroyer. But it also traffics in disruption, disarray: increasingly frequent and more powerful storms and droughts; heightened flooding; expanded ranges of pests turning forests into fuel for wildfires; stretches of inhospitable heat. So many facets of our existence — agriculture, transportation, cities and the architecture they spawned — were designed to suit specific environments. Now they are being slowly transplanted into different, more volatile ones, without ever actually moving.

His second point: in addition to the complete denial of those like the President, there are other psychological factors that make recognizing the severity of the situation difficult.  There are ways in which we as a species adapt to catastrophe.  He cites Peter Kahn, a professor of psychology at the University of Washington, who coined the term “environmental generational amnesia.”

Each generation, Kahn argues, can recognize only the ecological changes its members witness during their lifetimes…. Kahn pointed to the living conditions in megacities like Kolkata, or in the highly polluted, impoverished areas affected by Houston’s oil refineries, where he conducted his initial research in the early ’90s. In Houston, Kahn found that two-thirds of the children he interviewed understood that air and water pollution were environmental issues. But only one-third believed their neighborhood was polluted. “People are born into this life,” Kahn told me, “and they think it’s normal.”

He gives an example:

And low-lying cities around the world are experiencing increased “clear-sky flooding,” in which streets or entire neighborhoods are washed out temporarily by high tides and storm surges. Parts of Washington now experience flooding 30 days a year, a figure that has roughly quadrupled since 1960. In Wilmington, N.C., the number is 90 days. But scientists and city planners have conjured a term of art that defuses that astonishing reality: “nuisance flooding,” they call it.

“Nuisance flooding” indeed.  This is an example of people adapting to the crisis and normalizing it.  It is according to Kahn “one of the central psychological problems of our lifetime” and, according to Mooallem, this process “obscures the magnitude of so many concrete problems. You can wind up not looking away, exactly, but zoomed in too tightly to see things for what they are.  This type of adaptation doesn’t deny the existence of a problem, but sees it limited in scope or area.”

On the most fundamental level, Kahn argues, we are already adapting to climate change through a kind of tacit acquiescence, the way people in a city like Beijing accept that simply breathing the air outside can make them sick. “People are aware — they’re coughing and wheezing,” he told me, “but they’re not staging political revolutions.” Neither are we.

As with any change, first one must become aware.  It is not only the blatant and ill-founded denial of those such as the President about the reality of climate change and the way humans contribute to it, but it is also the psychological processes by which we adapt that we must be aware of.  Indeed, we must resist.

View all posts by Michael Korson →
On Psychoanalysis: The Personal is Still Political
Climate Change: June 1, 2017 was a Sad Day.