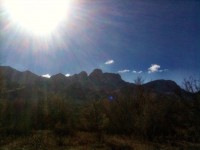 When I blog, I usually write about psychotherapy and psychoanalysis. I like to think about this means by which (usually) two people address the issues that are bothering one of them.  I like to think about what is really happening when two people sit down to talk at an appointed regular time in such an intimate way.  But in this blog and others to follow, I want to turn my attention to what is (arguably) the most pressing issue for all people, indeed for the planet: climate change.  On the heels of the weekend marches for Science, and given a recent issue of the Sunday Review section of The New York Times devoted to climate change, I want to add my voice to the call for thoughtfulness and action regarding this issue.  There is no more serious issue nor potentially as lethal one to all of humanity.

The Sunday Review section of the New York Times (4/23/17) takes up this issue and provides very specific examples of how climate change is not something that will happen, but is happening now.  In his lead article, entitled “The Planet Can’t Stand This Presidency,” Bill McKibben, a founder of 350.org who teaches environmental studies at Middlebury College, writes about the devastating impact of the current US President’s policies.  An impact that will be felt well beyond the 4 years of his presidency.  Mr. McKibben writes:

But there’s an extra dimension to the environmental damage. What Mr. Trump is trying to do to the planet’s climate will play out over geologic time as well. In fact, it’s time itself that he’s stealing from us. What I mean is, we have only a short window to deal with the climate crisis or else we forever lose the chance to thwart truly catastrophic heating.

The impact of those who deny climate change and human kind’s contribution to it is dangerous on so many levels.  Scaling back funding to agencies in charge of combating pollution, perhaps even eliminating these governmental agencies, and restricting or canceling research imperils the planet. And psychologically speaking, this level of denial hurts all of us. While denial is a defense mechanism and has a purpose (we have to deny the dangers of driving in order to do it, hopefully with seat belts fastened and full attention paid to the task), the addiction to denial evidenced by this Administration is corrosive and hurts all of us who try to think and deal with reality.  This level of denying reality can cause us to doubt reality.  This abdication of leadership can cause us great anxiety about no one at the helm steering the ship (or as in the song “Waist Deep in the Big Muddy,” steering all of us into quagmire and peril).

The reality is overwhelmingly clear now.  The impact of these misguided and scientifically ignorant policies will have lasting effects measured not in a president’s term but in geologic time.

The effects [of Trump’s policies] will be felt not immediately but over decades and centuries and millenniums. More ice will melt, and that will cut the planet’s reflectivity, amplifying the warming; more permafrost will thaw, and that will push more methane into the atmosphere, trapping yet more heat. The species that go extinct as a result of the warming won’t mostly die in the next four years, but they will die. The nations that will be submerged won’t sink beneath the waves on his watch, but they will sink. No president will be able to claw back this time — crucial time, since we’re right now breaking the back of the climate system.  We can hope other world leaders will pick up some of the slack. And we can protest. But even when we vote him out of office, Trumpism will persist, a dark stratum in the planet’s geological history. In some awful sense, his term could last forever.

The ominous note at the end of the above quotation should shake us to the core and motivate us to fight for the survival of the planet.  There is no other time than now.  I’ll blog in the future about other articles in this section of the Times that shed further light on the dire state of our planet.

View all posts by Michael Korson →
Mental Health Practitioners’ Petition Regarding the Current Political Climate
On Psychoanalysis: The Personal is Still Political